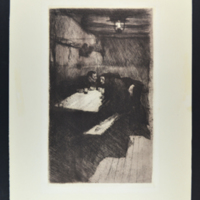 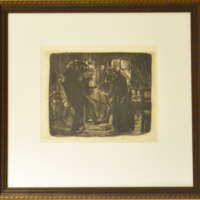 Kollwitz was a German artist born in 1867 in the Prussian city that is now Kaliningrad, Russia.  Her father recognized her artistic ability early in life and arranged private lessons in drawing.  With no colleges or academies admitting women, Kollwitz had to continue her art education at an art school for women in Berlin.  1n 1888 she attended the Women's Art School in Munich.  She became a prolific artist in drawing, printmaking, and sculpture, and her work centered on social issues and the plight of the poor and those affected by war.

In 1933, her work and political attitudes came under scrutiny by the Nazis who forced her to leave her faculty position at the Academy of Art in Berlin.  They removed her work from German museums and she was not allowed to exhibit.  A decade later she evacuated her home in Berlin for safety and her home was bombed later that year and many drawings, prints, documents, and other artwork was lost.  She was well cared for by friends at the end of her life, but sadly, she died just 16 days before the end of WWII.