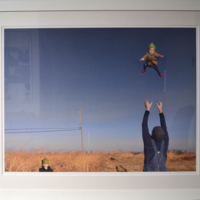 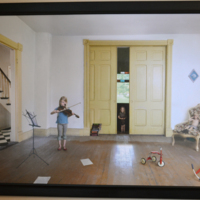 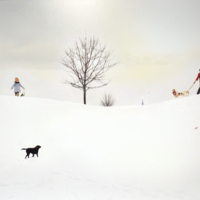 Blackmon’s photos have taken Springfield by storm, and the rest of the country has followed.  Her large family is often the focus of her lens, but in a whimsical manner that portrays the parody in everyday life.  “Baby Toss” would be horrifying if the viewer did not stop and think “Photoshop” before laughing at the absurdity of it. “The Concert” is dear to us at Drury because Blackmon staged it in the Rose O’Neill House before its restoration.  (Rose O’Neill purchased the house and lived in it at the end of her life.  It is now part of the campus and used for cultural functions.)  Finally, “Lost Mitten” was also photographed on the Drury campus.  Those in the know will recognize the steeple from Stone Chapel, and the now absent Tindle Mill tower.

Blackmon studied art education and photography at Missouri State University and began winning awards in 2004 with the Merit Award from the Society for Contemporary Photography in Kansas City.  She has gone on to win awards from Photospiva, a Critical Mass Book Award for Domestic Vacations, and two awards from the Santa Fe Center for Photography.  Her work is available from Robert Mann Gallery in NY, Catherine Edelman Gallery in Chicago, Photoeye Gallery in Seattle, Fahey Klein Gallery in LA, and the Photographers Gallery in London.