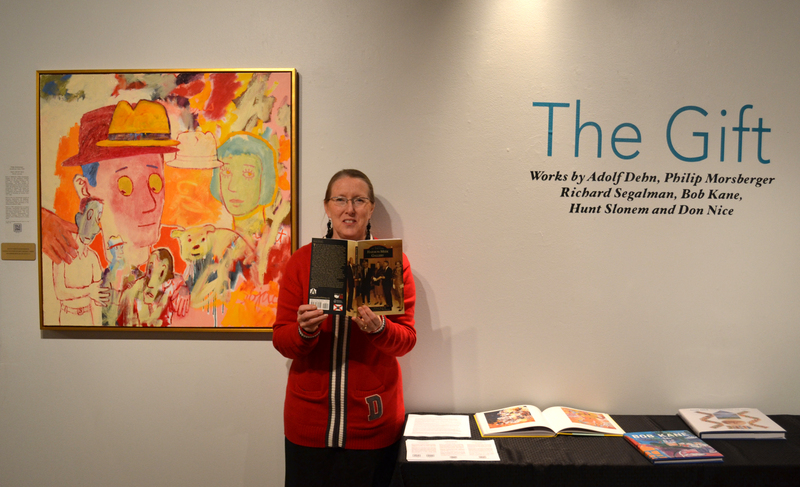 In late May, a van from ARTMove LLC pulled up in front of the Olin Library at Drury University and carefully delivered six paintings and a stack of books.  It was an unsolicited and somewhat surprising gift from a group of artists whose commonality is their representation by the Harmon-Meek Gallery in Naples, Florida.  We were one of eight institutions to receive a gift of art that week from the artists in William Meek’s circle.

Springfield attorney and businessman Sam F. Hamra and his wife June have been friends with Bill Meek for many years.  It is through the efforts of these three generous people that the six paintings you see here are now part of the Drury Art Collection.

Summers are a little quieter on a university campus, so it was in this atmosphere of unrushed calm that I was able to unwrap the paintings and take in the visual and emotional sensations they evoked.

“Hat’s Off #2” in particular made me laugh and filled the whole room with a warmth and joy that was infectious.  After researching Philip Morsberger and listening to him very articulately describe his painting philosophy in a TEDtalk, I have to conclude that he accomplished his mission.

“Ristorante tre Sorelle, Positano” exudes an energy and life that leaves the viewer hungry to visit such a place.  A quick Google search of Positano, Italy, reveals that Bob Kane’s gestural snapshot is spot-on.

Probably the most fun for me was discovering who Hunt Slonem is – or at least who he is in the public sphere - and what elements tie his oeuvre together.  At first glance, the small, square image of two tropical birds seems rather understated.  Nearly monochromatic with a rich and luminous blue prevailing, the texture and sheer quantity of impasto paint are the characteristics I first noticed.  His signature hatch marks apparently stem from years of looking across his studio through the multi-layered, large cages of his extensive aviary.  He’s a larger-than-life character who was fascinatingly entertaining in the online videos I found.

The lithographic mastery of Adolf Dehn was immediately apparent when unwrapping “Missouri River.”  What I was amused to discover later were the other subjects that make up his oeuvre.  An accomplished landscapist, he also engaged in social satire and documented the various follies he witnessed living in New York City and in his many years abroad.

I first thought Don Nice’s “Squirrel” was painted directly on the back of the glass in a deep frame.  Several people were equally fooled when they first saw it, so it sets up a curious trick of the eye.  On closer inspection I quickly realized the squirrel is actually a watercolor painting on paper that is cut out and mounted on small blocks.  Casting a shadow, it appears to be levitating in space.  An environmentalist at heart, Nice deals with wildlife and the environmental degradation we are imposing on it, but in a playful way that doesn’t hit you over the head.

Finally, when I unwrapped Richard Segalman’s “Homage to Degas,” I could not look at it enough.  His skillful and sensitive use of pastel reveals a practiced hand and keen observation coupled with the ability to allow ambiguity.  Blocks of color are perfectly balanced to support the central figure and keep the viewer’s eye moving all around the work.  It is intimate, sensual, and accomplished.

My previous unfamiliarity with these artists only speaks to my lack of knowledge rather than their lack of renown.  Indeed, they are all very fine artists who have been collected widely by major museums here and abroad.  Embarking on research to discover what I’d been missing was a fascinating endeavor and revealed a wealth of information available in monographs, museum and gallery websites, magazine articles, and sometimes nationally syndicated broadcast media such as CBS Sunday Morning, Studio 360, and TEDtalks.  I hope you enjoy the show and go away armed with a better understanding of these pieces when you see them hanging in various locations on campus.